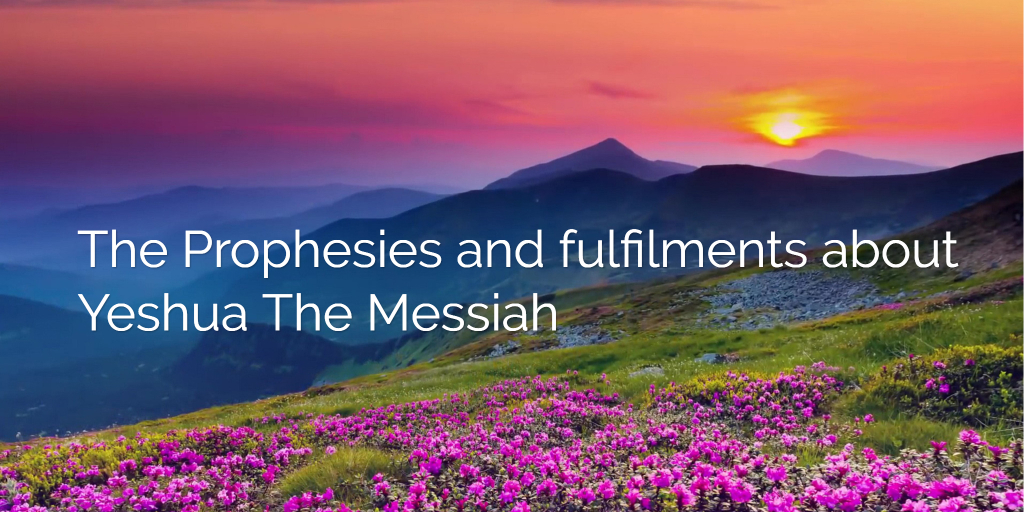 For many people, from the first century until now, the fulfilment of birth and life prophesies of Yeshua (Jesus) in the New Testament have strengthened their faith.

Birth of Yeshua The Messiah (Jesus) in Bethlehem

Old Testament prophesy:  Mica 5:2 – “But you, Bethlehem Ephrathah,
though you are small among the clans of Judah, out of you will come for me
one who will be ruler over Israel, whose origins are from of old from ancient times.”

New Testament Fulfilment:  Matthew 2: 1-6 – After Jesus was born in Bethlehem in Judea, during the time of King Herod, Magifrom the east came to Jerusalem 2 and asked, “Where is the one who has been born king of the Jews? We saw his star when it rose and have come to worship him.”

3 When King Herod heard this he was disturbed, and all Jerusalem with him. 4 When he had called together all the people’s chief priests and teachers of the law, he asked them where the Messiah was to be born.5 “In Bethlehem in Judea,” they replied, “for this is what the prophet has written:

6 “‘But you, Bethlehem, in the land of Judah,
are by no means least among the rulers of Judah;
for out of you will come a ruler
who will shepherd my people Israel.

Yeshua The Messiah (Jesus) was to be born of a virgin

Old Testament prophesy:  Isaiah 7:14 – Therefore the Lord himself will give you a sign: The virgin will conceive and give birth to a son, and will call him Immanuel.

Matthew 1:18-25 –  18 This is how the birth of Jesus the Messiah came about: His mother Mary was pledged to be married to Joseph, but before they came together, she was found to be pregnant through the Holy Spirit.19 Because Joseph her husband was faithful to the law, and yetdid not want to expose her to public disgrace, he had in mind to divorce her quietly.

20 But after he had considered this, an angel of the Lord appeared to him in a dream and said, “Joseph son of David, do not be afraid to take Mary home as your wife, because what is conceived in her is from the Holy Spirit. 21 She will give birth to a son, and you are to give him the name Jesus, because he will save his people from their sins.”

22 All this took place to fulfil what the Lord had said through the prophet: 23 “The virgin will conceive and give birth to a son, and they will call him Immanuel” (which means “God with us”).

Yeshua The Messiah (Jesus) was to be a prophet

Old Testament prophesy:  Deuteronomy 18: 18-19 – 18 I will raise up for them a prophet like you from among their fellow Israelites, and I will put my words in his mouth. He will tell them everything I command him. 19 I myself will call to account anyone who does not listen to my words that the prophet speaks in my name.

New Testament Fulfilment:  John7:40  40 On hearing his words, some of the people said, “Surely this man is the Prophet.”

Yeshua The Messiah (Jesus) was to enter Jerusalem in triumph

Old Testament prophesy: Zachariah 9:9 –  Rejoice greatly, Daughter Zion!
Shout, Daughter Jerusalem!
See, your king comes to you,
righteous and victorious,
lowly and riding on a donkey, on a colt, the foal of a donkey.

John12:12-16  – 12 The next day the great crowd that had come for the festival heard that Jesus was on his way to Jerusalem. 13 They took palm branches and went out to meet him, shouting,

“Hosanna!”“Blessed is he who comes in the name of the Lord!” “Blessed is the king of Israel!” 14 Jesus found a young donkey and sat on it, as it is written:

Old Testament prophesy: Isaiah 53:1-3 –  Who has believed our message
and to whom has the arm of the Lord been revealed?
2 He grew up before him like a tender shoot,
and like a root out of dry ground.
He had no beauty or majesty to attract us to him,
nothing in his appearance that we should desire him.
3 He was despised and rejected by mankind,
a man of suffering, and familiar with pain.
Like one from whom people hide their faces
he was despised, and we held him in low esteem.

Read Psalm 118:22 for a better understanding.

Matthew 26: 3-4 –  Then the chief priests and the elders of the people assembled in the palace of the high priest, whose name was Caiaphas, 4 and they schemed to arrest Jesus secretly and kill him.

Yeshua The Messiah (Jesus) was to be tried and condemned

Old Testament prophesy:  Isaiah 53:8 – By oppression and judgment he was taken away. Yet who of his generation protested?
For he was cut off from the land of the living;
for the transgression of my people he was punished.

Matthew 27: 1-2 – Early in the morning, all the chief priests and the elders of the people made their plans how to have Jesus executed. 2 So they bound him, led him away and handed him over to Pilate the governor.

Yeshua The Messiah (Jesus) was to be silent before his accusors

Matthew 27: 12-14  – When he was accused by the chief priests and the elders, he gave no answer. 13 Then Pilate asked him, “Don’t you hear the testimony they are bringing against you?” 14 But Jesus made no reply, not even to a single charge—to the great amazement of the governor.

Old Testament prophesy: Isaiah 50:6 – I offered my back to those who beat me,
my cheeks to those who pulled out my beard;
I did not hide my face
from mocking and spitting.

Matthew 26: 67 – Then they spit in his face and struck him with their fists. Others slapped him

Matthew 27: 30 – They spit on him, and took the staff and struck him on the head again and again.

Mark 14: 65 – Then some began to spit at him; they blindfolded him, struck him with their fists, and said, “Prophesy!” And the guards took him and beat him.

Old Testament prophesy: Isaiah 53:12 – Therefore I will give him a portion among the great,[a]
and he will divide the spoils with the strong,[b]
because he poured out his life unto death,
and was numbered with the transgressors.
For he bore the sin of many,
and made intercession for the transgressors.

Matthew 27: 38 – Two rebels were crucified with him, one on his right and one on his left.

Luke 23: 32-34 –  Two other men, both criminals, were also led out with him to be executed. 33 When they came to the place called the Skull, they crucified him there, along with the criminals—one on his right, the other on his left. 34 Jesus said, “Father, forgive them, for they do not know what they are doing.”[a] And they divided up his clothes by casting lots.

But he was pierced for our transgressions, he was crushed for our iniquities; the punishment that brought us peace was on him,
and by his wounds we are healed.
6 We all, like sheep, have gone astray, each of us has turned to our own way; and the Lord has laid on him  the iniquity of us all.7 He was oppressed and afflicted, yet he did not open his mouth; he was led like a lamb to the slaughter,  and as a sheep before its shearers is silent, so he did not open his mouth.8 By oppression and judgment he was taken away.
Yet who of his generation protested? For he was cut off from the land of the living; for the transgression of my people he was punished.
9 He was assigned a grave with the wicked, and with the rich in his death,
though he had done no violence, nor was any deceit in his mouth.

10 Yet it was the Lord’s will to crush him and cause him to suffer, and though the Lord makes his life an offering for sin, he will see his offspring and prolong his days, and the will of the Lord will prosper in his hand.11 After he has suffered, he will see the light of life and be satisfied;
by his knowledge my righteous servant will justify many, and he will bear their iniquities.12 Therefore I will give him a portion among the great, and he will divide the spoils with the strong because he poured out his life unto death,  and was numbered with the transgressors.
For he bore the sin of many, and made intercession for the transgressors.

John1:29 – The next day John saw Jesus coming toward him and said, “Look, the Lamb of God, who takes away the sin of the world!

John11:49-52 – Then one of them, named Caiaphas, who was high priest that year, spoke up, “You know nothing at all! 50 You do not realize that it is better for you that one man die for the people than that the whole nation perish.”

51 He did not say this on his own, but as high priest that year he prophesied that Jesus would die for the Jewish nation, 52 and not only for that nation but also for the scattered children of God, to bring them together and make them one.

Acts10:43 – All the prophets testify about him that everyone who believes in him receives forgiveness of sins through his name.”

Acts 13: 38-39 : “Therefore, my friends, I want you to know that through Jesus the forgiveness of sins is proclaimed to you. 39 Through him everyone who believes is set free from every sin, a justification you were not able to obtain under the law of Moses.